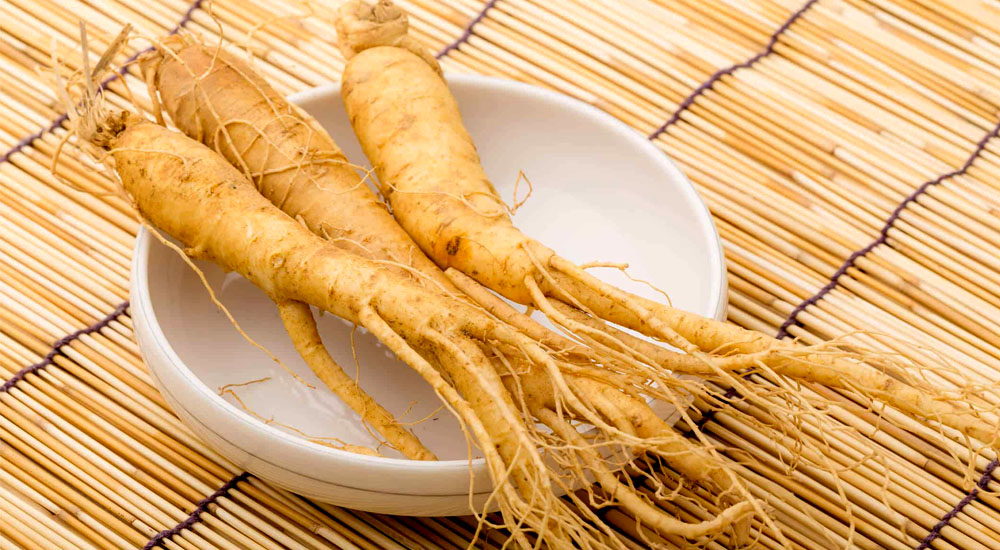 Ginseng is a type of slow-growing perennial plant that belongs to the genus Panax in the family Araliaceae. It has a light-colored root that’s shaped like a fork, a relatively long stalk, and green leaves in an oval shape. The word ginseng is derived from the Chinese word ‘ren-shen’ which means ‘human root’. It is so-called because the root of the plant has the shape of the human body.

Both Asian ginseng and American ginseng contain active compounds called ginsenosides. Researchers believe that ginsenosides are responsible for many of the health benefits associate with ginseng. These compounds are good for health because they contain antioxidant, anticancer, and anti-inflammatory properties.

Ginseng contains ginsenosides, which have been reported to have anticancer properties. It can lower the level of oxidative stress and inflammation, both of which play an important role in causing cancer [1].

A review of several studies concluded that people who take ginseng may have a 16 percent lower risk of developing cancer [2].

Moreover, an observational study suggested that people taking ginseng could be less likely to develop certain types of cancer, such as mouth, lip, esophagus, stomach, colon, liver and lung cancer, than those who do not take it [3].

A number of studies suggest that ginseng can help to regulate blood sugar levels and boost insulin production.

One study assessed the effects of 6 grams of Korean red ginseng (KRG), along with the usual anti-diabetic diet and/or medications, in 19 people with type 2 diabetes for 12 weeks.

Another study found that taking American ginseng before a meal reduces blood sugar in people both with and without diabetes. In a small study at the University of Toronto, researchers found that patients with type 2 diabetes could lower their blood glucose levels by 20% when they consumed 3 g of American ginseng either 40 minutes before a meal or during the meal [5].

Many studies have shown a significant positive relationship between ginseng and brain conditions like neurological disease and mental health.

One study followed 30 healthy people who consumed 200 mg of Panax ginseng daily for four weeks. At the end of the study, they showed improvement in mental health and social functioning. However, these benefits stopped being significant after 8 weeks, suggesting that ginseng effects might decrease with extended use [6].

Another study examined how single doses of either 200 or 400 mg of Panax ginseng affected mental performance and blood sugar levels in 30 healthy adults before and after a 10-minute mental test. The result showed that the 200-mg dose, as opposed to the 400-mg dose, was more effective at improving mental performance during the test [7].

Ginseng possesses potent antibacterial, antifungal, and antiviral properties, which may enhance the function of the immune system.

One animal study found that black red ginseng extract increased the number of immune cells and enhanced antioxidant levels in the liver [8].

Similarly, another study in 100 people showed that taking 2 g of Korean red ginseng per day for 8 weeks significantly increased levels of immune cells compared to a placebo [9].

However, more studies in humans are needed to understand the potential effects of ginseng on immune function.

The ginsenosides found in Ginseng may help ease fatigue and increase energy levels. They work by fighting inflammation that can worsen fatigue and keeping your nervous system in good condition, so it doesn’t become overexcited and deplete your energy levels.

In fact, a review of 10 studies concluded that ginseng could significantly improve symptoms of chronic fatigue syndrome compared to a placebo, even after just 15 days [10].

Another review showed that taking American or Asian ginseng could decrease symptoms of cancer-related fatigue when taken in doses of 2,000 mg or 3,000 mg per day, respectively [11].

Ginseng may promote the production and release of nitric oxide, which helps the muscles to relax and this allows the blood to enter the erectile bodies, thus causing erection.

In addition to that, it seems that compounds in it may protect against oxidative stress in blood vessels and tissues in the penis and help restore normal function [14].

One study found that men treated with Korean red ginseng had a 60% improvement in ED symptoms, compared to 30% improvement produced by a medication used to treat ED [15].

How Much Ginseng Can You Take Daily?

There is no standard dose of ginseng recommended, so it is advised to consult a doctor before taking it as it varies from one person to another based on a person’s age, lifestyle, health condition, and so on.

In general, it is suggested to take around 200 to 400 mg of ginseng extract or 1 to 2 grams of ginseng root per day. It is always better to start at lower doses if you are new to the supplement as it will help to understand any side effects or other issues that may arise and then it can be increased later as per the need and/or advice of the doctors.

Ginseng Side Effects and Warnings

Although ginseng is considered safe to consume, but high doses of ginseng has been reported to cause insomnia. So, if you have trouble sleeping, use Panax ginseng with caution.

The other common side effects of high doses or long-term use of ginseng include headache, rapid heartbeat, diarrhea, nausea, and stomach upset.

Since ginseng may affect blood sugar levels. So if you’re taking drugs for diabetes, consult with your doctor before taking the supplement.

Additionally, women who are pregnant or breastfeeding and children under 12 should not take giseng because there aren’t enough studies to confirm if ginseng is safe for this group of population.