6 Foods That Improve Focus and Concentration

We all know that concentration is very important in our daily life. It is one of the main factors for success in all areas of life. If you found that you’re not able to concentrate on your work, keep in mind that you are not alone. In fact, not being able to concentrate is a common problem among people all over the world.

If you’re struggling to stay focused at work, here are some foods that can help improve your concentration as well as your mental alertness.

Coffee has caffeine which has been known to increase alertness. Caffeine is a natural stimulant that stimulate the autonomic nervous system (ANS) and boost alertness [1] – but this is only short term.

Although the effects are not long-lasting, it can definitely alert the brain and help you improve your concentration.

According to Harvard Health Publications, caffeine can provide increased energy and improved mental performance. It was also suggested that coffee can reduce the progression of age-related mental decline.

But do keep in mind that drinking too much of coffee may increase the risk of heart disease so limit your coffee intake to one or two cups a day. Experts also suggest that pregnant women should either avoid caffeine or limit their consumption to no more than one cup a day.

Chocolate is high in flavonols, which has been proven to boost mental alertness. In fact, a 2015 study by researchers at Northern Arizona University found that participants who consumed chocolate with 60 percent cacao content tended to be more alert and attentive [2].

It also helps stimulate the release of endorphins and serotonin, which make you feel happy and and relax.

However, not all chocolate is created equal; most of the chocolate you see in the grocery store is heavily processed with very little cocoa content. So, be sure buy dark chocolate with more than 60% of cocoa to reap the benefits.

Ginseng is a stimulant which improves concentration, memory and physical performance. Some studies have shown that the properties in some ginseng strands increased protein synthesis in the brain and thus concluded that it is good for memory and concentration.

Another study found that ginseng has positive effects on brain function and behavior in people with Alzheimer’s disease [4].

Cabbage is a powerful brain food, particularly the red variety. It contains anthocyanins and vitamin K, which may help boost mental function and concentration.

Anthocyanin is effective at reducing plaque on the brain, preventing the deterioration of short- and long-term memory.

Vitamin K is essential for protecting the nerves from damage and decay. Therefore, consuming vitamin K can improve your defense against conditions such as Alzheimer’s and dementia.

Eggs are a good source of protein and choline, which help regulate memory and mood. A 2011 study published in the Journal of the American College of Nutrition showed that choline found in eggs yolk helps with better memory and brain function [5]. Eggs also contain vitamin B12, a nutrient that keeps the brain and nervous system healthy.

Spinach is loaded with antioxidants and B-vitamins, which help boost memory, focus and overall brain health. They are also a good source of folic acid which helps boost mental clarity. Researchers discovered that rats fed a diet containing a good amount of spinach performed far better on a memory and learning test. 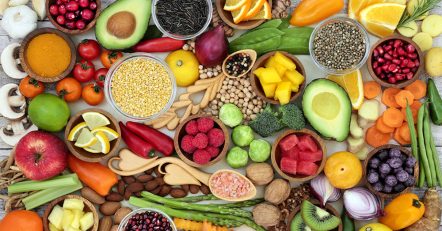