Cordyceps is one of the most valued and expensive fungi that has been used for thousand of years in traditional Asian and Chinese medicine to promote health and well-being. Let’s take a closer look at this amazing fungi!

Cordyceps is a parasitic fungus that grows on certain types of caterpillars and is found mainly in the high altitudes of the Himalayas and the Tibetan plateau.

The name “Cordyceps” is derived from the Latin words “cord,” meaning “club” and “ceps,” meaning “head.” The words accurately describes the appearance of this club fungi.

Considered to be an exotic mushroom, cordyceps is actually a fungus that attaches itself to a caterpillar, filling it with mushroom’s mycelium and using the carcass a caterpillar as food. It then shoots out medusa-like stems that grow outside the host’s body.

Cordyceps is known by many different names around the world. For example, ‘caterpillar fungus’ in English, ‘Dong Chong Xia Cao’ in Chinese, ‘yartsa gunbu’ in Tibetan, ‘yarshagumba’ in Nepalese, and so on.

There are over 400 documented species of cordyceps, but only two species are widely used and valued in traditional Asian medicine. They are Cordyceps sinensis and Cordyceps militaris. 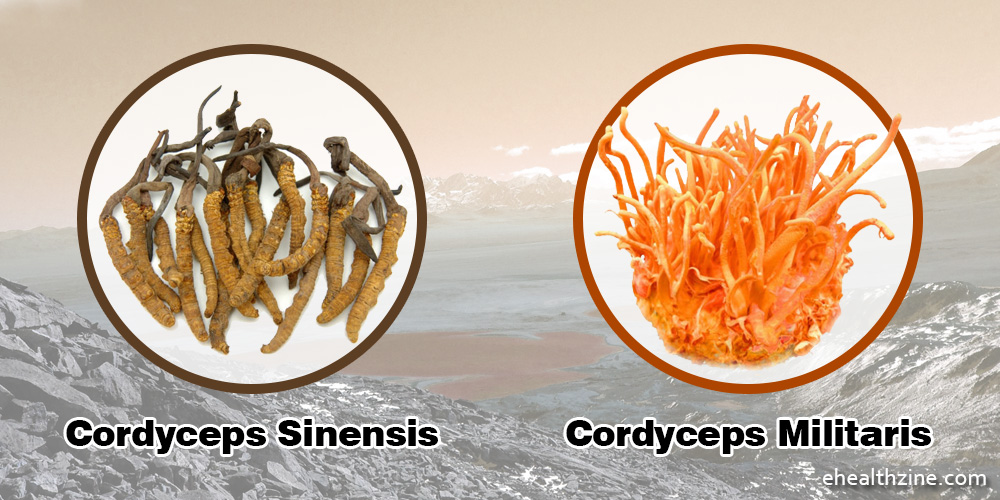 Cordyceps sinensis is the most well-known and expensive species, but it is quite rare and cannot be easily grown in culture whereas cordyceps militaris is the most successfully cultivated species.

Cordyceps contains a wide range of health-promoting compounds, including all of the essential amino acids, proteins, vitamin E, K, and B vitamins, as well as minerals such as calcium, potassium, magnesium, iron and zinc.

In addition, it also contains several chemical compounds such as polysaccharides, nucleosides, and sterols. Many studies have shown that these components play an important role in human health.

Cordyceps has long been used by athletes to boost energy levels. It works by increasing the amount of oxygen uptake in the body and enhance cellular energy production, thereby providing an extra push for people who need an instant energy boost.

In one study, researchers tested their effects on exercise capacity in 30 healthy older adults using a stationary bike. The participants received either 3 grams per day of a synthetic strain of cordyceps called CS-4 or a placebo pill for six weeks.

By the end of the study, maximal oxygen uptake had increased by 7 percent in participants who had taken CS-4, while participants given the placebo pill showed no change.

Another study from the Hong Kong University of Science and Technology shows that cordyceps can significantly boost the body’s ability to produce adenosine triphosphate (ATP), which is the most essential source of usable energy needed for all cellular function.

Cordyceps is also widely used to strengthen the immune system and promotes the antibody production in the body. These protect the body against bacteria and viruses.

The fungus stimulates the production of NK cells (natural killer cells), which are one of the body’s first lines of defense against illness. The immunoprotective effects have been found to help against a wide range of ailments, from the common cold to cancer.

Cordyceps has been found to potential slow the growth of cancer cells. Studies have linked cordyceps to a reduction in tumor size. The biochemical compounds it contains may potentially help slow the spread of cancer by shrinking tumors, making it easier to eliminate the cancer cells.

In test-tube studies, cordyceps have been shown to inhibit the growth of many types of human cancer cells, including colon and lung cancer [1, 2].

Studies in mice have also shown that cordyceps have anti-tumor effects on lymphoma and melanoma [3, 4].

Cordyceps has also been found to have anti-aging benefits. A study conducted by the School of Pharmaceutical Sciences at Peking University in Beijing found that cordycep extract supplements had anti-aging effects on mice and improved activity of antioxidants, including superoxide dismutase and glutathione peroxidase. Cordyceps also lowered the level of lipid peroxidation and monoamine oxidase activity that contributed to aging in the mice.

Some evidences suggest that supplementation with cordyceps may help improve the function of the brain.

A 2014 study published in Evidence Based Complimentary and Alternative Medicine showed that cordyceps supplementation reduced inflammatory markers in the hippocampus of the brain. It also raised up brain-derived neurotrophic growth factor and 5-HTP (precursor to serotonin and norepinephrine levels). These results demonstrated that cordyceps has positive benefits on mood and memory levels.

Another 2012 study showed that cordyceps lowered inflammatory markers in the brain of D-galactose injected mice and increased key anti-oxidants such as superoxide dismutase and glutathione. The non-treated mice showed signs of early mental decline while the cordyceps treated mice showed great ability to think and function at a high level. The researchers suggested based on study results that cordyceps improves memory and ameliorates the decline of mental function.

Cordyceps may help improve your heart health as well. A study published in the 1999 issue of the Journal of Alternative Complementary Medicine reported that cordyceps can lower total cholesterol by 10-20 percent and increase HDL by a quarter.

Other study found that patients who were given a powdered supplement of cordyceps were significantly less likely to suffer from heart failure. This mainly due to its anti-inflammatory properties which can prevent heart arrhythmia.

Cordyceps is also commonly used for the treatment of different kinds of diseases linked to the kidney.

A 2011 study from Zhejiang University found that cordyceps has the potential to inhibit renal fibrosis, a hallmark of chronic kidney disease, by shutting down inflammatory pathways that destroy the kidneys normal function and produce fibrous scar tissue.

A 2014 study published in the journal Phytomedicine confirmed this earlier 2011 study. The researchers found that the ergosterol peroxide (EP), the major sterol produced by cordyceps was the major component that was able to shut down the transforming growth factor-β1 (TGF-β1) pathway that promotes the fibrous growth patterns that render the kidney useless.

In some animal studies, cordyceps supplement was found to decrease blood sugar levels in people with diabetes.

According to an animal study published in the March 2014 edition of the journal “BioMed Research International,” researchers gave diabetic mice cordyceps to observe potential benefits. They found that cordyceps significantly lowered blood sugar by helping the body use glucose more efficiently, in a manner similar to the diabetes medication metformin.

Cordyceps is also beneficial for people suffering from cough, asthma and bronchitis. The anti-inflammatory properties of cordyceps have been shown to increase the amount of oxygen taken in by the lungs, thereby improving the functioning of the respiratory system.

Numerous studies have shown that cordyceps extract may help with sexual dysfunction.

A study published in The Journal of Alternative and Complementary Medicine found that cordyceps is effective in increasing sex drive and affects sexual functions either via sex hormone systems or by directly acting on the sexual organs.

The results are based on a study involving a total of 756 people with decreased sex drive who were given either a placebo or 3 grams per day of cordyceps for 40 days. By the end of the study, 64.8 percent of the cordyceps users reported significant improvement in sexual function compared with 23.8 percent of the placebo group.

In another study conducted on both elderly men and women with decreased libido, impotence and other sexual malfunctions, who were given 3 grams per day of cordyceps for 40 days, showed increased sperm survival time and increased sperm count, and most of the patients reporting reversal of their impotence.

To date, there is not enough scientific information to determine an appropriate range of doses for cordyceps. The recommended dosage requirements may vary, depending on the source.

In general, clinical trials have been conducted using 3–6 grams of cordyceps per day, according to Drugs.com. In Traditional Chinese Medicine (TCM), the recommended dosage of cordyceps would be 5-10 grams per day.

Cordyceps supplements are available in the form of tablets, powder, and capsules. Follow the dosage advice on the product label or consult with your doctor about treating a specific condition.

Side Effects and Warnings

Cordyceps is generally safe when used in recommended doses, but there are potential side effects to be aware of, especially for people with a history of autoimmune diseases and those with blood clot issues.

Individuals who have auto-immune diseases such as lupus, multiple sclerosis, or rheumatoid arthritis, should not take cordyceps because it stimulates the immune system, which could worsen the problem.

Since cordyceps may slow blood clotting, so taking this fungi might increase the risk of bleeding in people with bleeding disorders. Also, it shouldn’t be taken at least two weeks before or after surgery due to its influence on blood clotting.

Additionally, women who are pregnant and children should avoid taking it because the safety of cordyceps hasn’t been well-researched or confirmed in this population.

Facebook
Twitter
WhatsApp
Email
Previous article10 Health Benefits of Sardines
Next articleWhat is a Balanced Diet and Why is it Important?