Diabetes is a disease that occurs when a person’s body can no longer produce hormone insulin or response to insulin properly. If left untreated, this disease may lead to health complications, such as heart disease, kidney failure, nerve damage, blindness, and limb amputations.

Eat an apple a day help keeps diabetes away. Apples are very useful when it comes to treating diabetes because it contains pectin which may lower the body’s insulin needs.

A study has found that women who ate at least one apple a day were 28 percent less likely to develop type 2 diabetes than those who did not eat apples.

Broccoli is a good source of chromium which is a mineral that helps regulate blood sugar and insulin. It also could reverse the damage caused by diabetes. It helps by reducing the damage to the blood vessels (people with diabetes are five times more likely to suffer heart attack and stroke, both linked to damaged blood vessels).

The researchers believe that the key is a compound called sulforaphane found in the vegetable. Sulforaphane is an organosulfur compound that help protect blood vessels and reduce high levels of molecules which cause significant cell damage.

Bitter melon is one of the most commonly used vegetable to treat diabetes naturally. It contains an insulin-like polypeptide called polypeptide-p, which is known to decrease blood sugar levels.

In addition, bitter melon also has hypoglycemic agent called charantin, which increases blood sugar uptake and glycogen synthesis inside the cells of the liver, muscle, and fatty tissue. Together, these compounds may help reduce blood sugar levels and regulate insulin response in people with diabetes.

According to researchers from Harvard School of Public Health, a diet high in whole grains can lower the risk of diabetes and heart disease.

The high soluble fiber contained in nuts is not only beneficial for your digestive system, but it also keeps blood sugar from spiking after meals. If you have type 2 diabetes, eating nuts can help balance your blood sugar levels while providing steady, slow-burning energy.

Fatty fish, such as tuna, mackerel, and salmon, are rich in omega-3 EPA and DHA. These fatty acids have been shown to reduce inflammation, protect blood vessel, and improve insulin resistance.

Fish is also a great source of protein, which not only makes you feel fuller for longer, but also aids in reducing blood sugar spikes when consumed at mealtime.

Garlic contain many organic compounds, such as allyl propyl disulphide (APDS), allicin, flavonoids, which are important components to decrease blood glucose levels and stimulate the pancreas to release insulin.

Recent studies have found that cinnamon may have a regulatory effect on blood sugar level, making it very beneficial for people with type 2 diabetes. To include cinnamon in your diet, just sprinkle it over your tea, coffee, or cereal.

Green tea has been used traditionally to control blood sugar levels. The polyphenols found in green tea can help regulate glucose in the body, thus helping to prevent diabetes.

One study in Japanese individuals found that those who consumed the most green tea had a 42 percent lower risk of developing type 2 diabetes. Moreover, a study conducted on 286,701 individuals revealed that people who drank green tea regularly had 18 percent lower chance of becoming diabetic.

Soybeans contain a lot of fiber and protein, which are important nutrients in reducing urinate excretion of sugar in people suffering from diabetes.

Olive oil is an excellent source of monounsaturated fat, a type of healthy fat that help cut off the risk of heart attacks and has been shown to help maintain stable blood sugar levels by reducing insulin resistance.

The acetic acid in apple cider vinegar has been shown to improve insulin sensitivity. In a study of eleven patients with type 2 diabetes showed those who consumed apple cider vinegar before a meal had an increased uptake of sugar into the cells and reduced blood sugar levels.

Try drinking one tbsp of apple cider vinegar with a cup of water before you eat to help reduce a spike in blood sugar.

Citrus fruits, like oranges, lemons, and grapefruits, have a low glycemic index and high soluble fiber, that help slow the absorption of sugar in the blood.

Citrus fruits are also rich in vitamin C and study has shown that daily consumption of 1000 mg supplementary vitamin C may be beneficial in decreasing blood glucose in patients with type 2 diabetes and thus reducing the risk of complications. However, study participants who received only 500 mg of vitamin C didn’t experience notable reductions in blood sugar.

Researchers have found that incorporating blueberries in your diet can help improve insulin sensitivity and maintain a healthy blood sugar.

These benefits are due to anthocyanins in the blueberries, a phytochemical that encourages the release of adiponectin, a hormone that is responsible for regulating blood glucose levels. Blueberries also have high levels of soluble fiber, which helps slow down the digestion process, leading to a gradual rise in blood sugar levels.

In a study conducted by Australian researchers showed that when people with type 2 diabetes including chili peppers in their daily diet, the amount of insulin needed to lower blood sugar after meals is reduced. Moreover, chili peppers contain vitamin C and carotenoids, which may help regulate insulin. 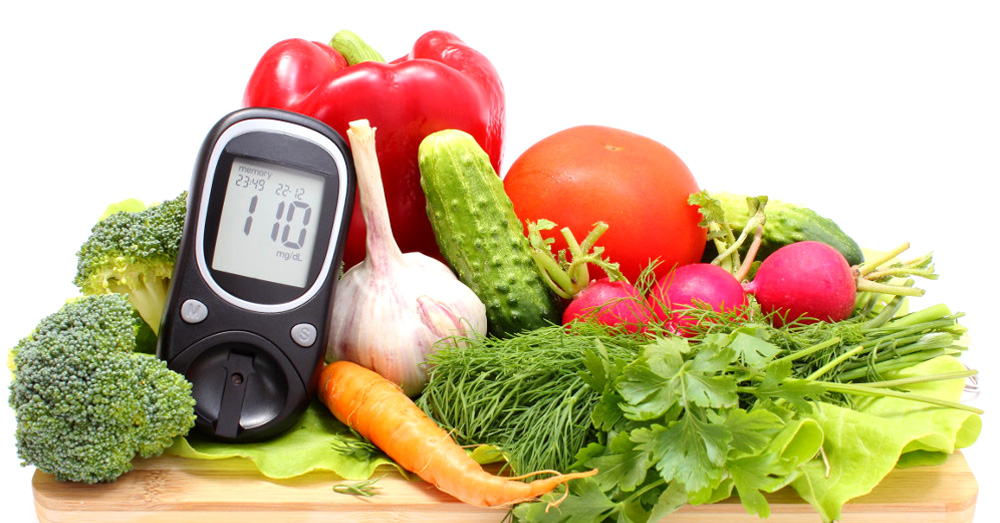