Anemia is a blood disorder that occurs when the body does not have enough red blood cells (RBCs), a common type of blood cell that is responsible for delivering oxygen around the body. 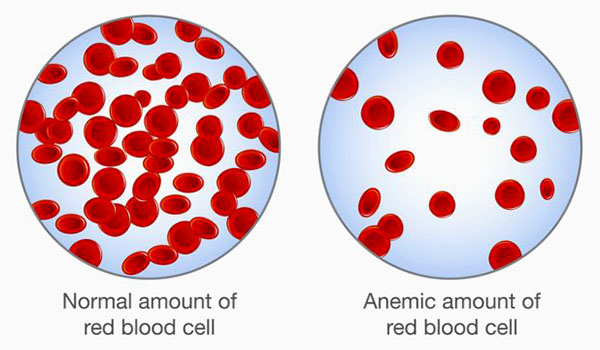 When you don’t have enough RBCs or the level of hemoglobin in your blood is low, your body doesn’t get the oxygen it needs. As a result, you may feel tired or have other symptoms.

Anemia is the most prevalent blood condition in the United States, affecting more than 3 million Americans. It can range from mild to severe. Although many anemia cases are mild and easily treated, some forms are severe and can even be life-threatening if not diagnosed and treated appropriately.

There are three main causes of anemia:

Blood loss is the most common cause of anemia, particularly iron-deficiency anemia. It may occur due to heavy menstrual bleeding, hemorrhoids, stomach ulcers, surgery, trauma, or colon cancer.

Your body may not produce enough red blood cells if your diet is lack in nutrients like iron, vitamin B12 and folate, or is not able to absorb these nutrients properly from the gut.

Anemia may also result when too many red blood cells are damaged or destroyed. Normally, red blood cells have a life span of 120 days in the bloodstream, but the body may destroy them before they complete their natural life cycle. This may occur when the immune system mistakes RBCs for a foreign substance and attacks them.

Other causes of an excessive RBCs destruction include:

What are the Risk Factors of Anemia?

Factors that increase your risk for anemia include: