Considered as one of the healthiest drinks in the world, green tea is loaded with powerful antioxidants and nutrients that offer numerous health benefits. 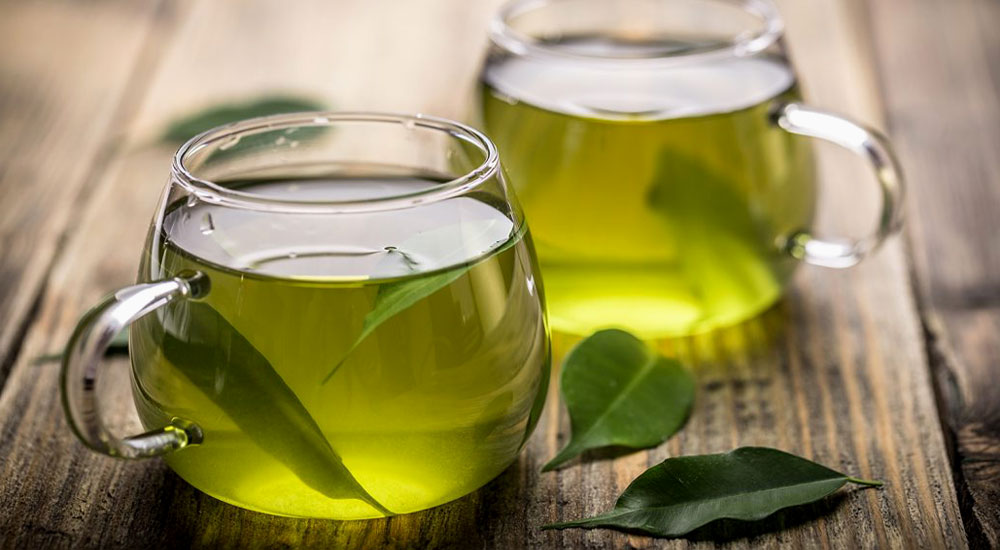 Green tea is a kind of tea that made from leaves of Camellia sinensis that have undergone minimal oxidation during processing.

Green tea is believed to have originated in China and has been consumed for centuries in many Asian and western cultures.

In traditional Chinese and Indian medicine, green tea was used as a diuretic to flush excess liquid from the body, heal wounds, and improve cardiovascular health. Drinking green tea has been shown to positively affect the body in many ways and inhibit the progression of various diseases.

Green tea is considered as one of the healthiest beverages in the world. It contains huge numbers of compounds, including catechin polyphenols, flavonoids, theophylline, and many other organic substances. It also contains small amounts of minerals and trace elements, like calcium, iron, magnesium, manganese, zinc, and copper.

The most powerful compound in green tea is a catechin called epigallocatechin-3-gallate (EGCG), a natural antioxidant that helps protect the body’s cells from free radical damage. Free radicals are a major culprit in the aging process, as well as the development of a number of chronic diseases, such as cancer and heart disease.

The following are some amazing health benefits of drinking green tea.

Green tea has been found to be able to kill off cancer cells without damaging healthy cells. It is an excellent source of powerful antioxidants, which have anti-inflammatory properties and play an important role in reducing your risk of developing cancer

Green tea has been found to be able to kill off cancer cells without damaging healthy cells. It is an excellent source of powerful antioxidants, which have anti-inflammatory properties and play an important role in reducing your risk of developing cancer [1].

According to some studies, green tea consumption is effective against the progression of colon, lung and prostate cancer [2,3,4]. However, more research is needed to confirm these findings.

Drinking green tea on a regular basis is associated with a reduced risk of stroke.

A study conducted by researchers on a total of 82,369 Japanese adults aged 45 to 74 years found that those who drank green tea regularly – at least four cups measuring six ounces per day – were about 20 percent less likely to experience a certain type of stroke compared to those who didn’t [5].

Green tea has been used in traditional medicine to keep blood sugar levels stabilized. This may be due to the fact that it helps regulate glucose levels in the body, slowing the rise of blood sugar after eating.

In an animal study, published in the journal Molecular Nutrition & Food Research, the researchers found that mice who fed EGCG – an antioxidant found in green tea – after eating starchy foods had a reduction in their blood sugar by about 50% compared to mice that were not fed the antioxidant.

Another study in Japan found that those who consumed the most green tea had a 42 percent lower risk of developing type 2 diabetes.

Studies show that drinking green tea may improve your eyesight too.

In a 2010 study, published in the Journal of Agricultural and Food Chemistry, researchers fed green tea extract to laboratory rats and then analyzed their eye tissues. They found that certain parts of the eye, such as the retina, absorb the most catechins, while other areas, like the cornea, absorb the least. The study also showed that a measure of antioxidant activity lasted for up to 20 hours after the drinking green tea extract [6].

Although the study has not been performed on humans yet, the researchers have concluded that consuming green tea may provide protective benefits when it comes to eye health.

Green tea may act as an overall immune booster. The polyphenols in green tea can help to keep the immune system functioning properly. Healthy immune systems are needed to fight off infections from bacteria, parasites and viruses.

Note: Don’t add milk to your green tea as the protein in milk will adhere to the polyphenols, making them ineffective.

Green tea is packed with EGCG which has been shown to be able to block the production of histamine and immunoglobulin E (IgE), two compounds that are known to trigger allergy symptoms. Quercetin, a naturally occurring flavonols in green tea, can also alleviate a histamine response.

The chemicals found in green tea have been shown to benefit bone health.

In a study conducted by Dr. Ping Chung Leung and colleagues, from the Institute of Chinese Medicine at the Chinese University of Hong Kong, the scientists exposed a group of cultured rat osteoblast-like cells to three major green tea components – epigallocatechin (EGC), gallocatechin (GC), and gallocatechin gallate (GCG) – for several days [7].

They found that one catechin in particular, EGC, stimulated the action of a key enzyme that promotes bone growth by up to 79%.

The EGC also increased the level of bone mineralization in the cells, which strengthens bones. In addition, they found that EGC significantly inhibited the activity of osteoclast, a type of cell that breaks down or weakens bones.

The EGCG in green tea has been found to be effective in preventing Alzheimer’s disease and promoting overall brain health.

According to a study published in the Journal of the American Chemical Society, the green tea polyphenol epigallocatechin gallate (EGCG) helps in stopping the formation of beta-amyloid plaques — a hallmark of Alzheimer’s disease — by interfering with the function of beta-amyloid oligomers. Beta-amyloid oligomers are said to cause the inflammation in the brain, which is one of the earliest signs of Alzheimer’s disease [8].

Another study published in Psychopharmacology found that green tea can actually help improve cognitive function and may be useful in treating patients who have dementia [9].

Green tea have also been shown to be beneficial for periodontal health.

According to a study published in the Journal of Periodontology, regular intake of green tea may help promote healthy teeth and gums.

The polyphenol found in green tea can increase fat burning and boost metabolic rate, which will burn more calories and help you lose weight.

Another study showed that those who consumed green tea lost an average of 2.9 pounds during a 12-week period, while sticking to their regular diet.

Polyphenols in green tea have antidepressant-like effects that help fight symptoms of depression.

A 2009 study published in the American Journal of Clinical Nutrition looked at the effects of drinking green tea on 1,058 elderly people with depression symptoms. The result showed that elderly people who drank more than four cups of green tea each day had a 44 percent reduction in major depressive symptoms than those who drank less than one cup per day.

In another study of 14,001 elderly Japanese individuals (aged 65–84 years), those who drank the most green tea were 76% less likely to die the six-year study period [12].

Green tea does contain caffeine, which acts as a stimulant. Although it has less caffeine than coffee but it can still produce an effect if taken in large amounts. If you are sensitive to caffeine, it is advisable to limit your green tea intake to no more than 1 cup a day.

Apart from this, green tea also contains tannins, which can cause stomach ache, nausea, and constipation when taken excessively. Read more about the side effects of drinking green tea.