Potatoes are an incredible root vegetable that are highly versatile and provide a wide range of health benefits. 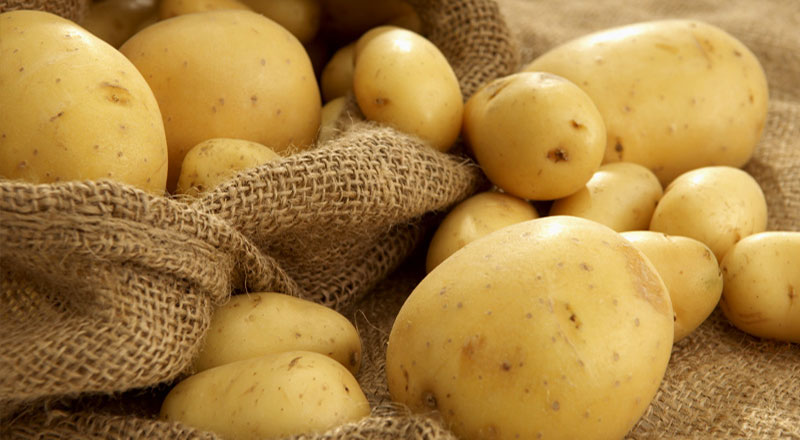 Potato (Solanum tuberosum) is a member of the nightshade family (Solanaceae), a family of flowering plants that also includes eggplant, tomatoes, and peppers.

The word “potato” comes from the Spanish word patata, originally referred to the sweet potato, and the nickname “spud” has an unknown origin but originally used as a term for a short dagger, possibly from the Dutch spyd. It subsequently transferred over to a variety of digging tools, and the word eventually became associated with the tuber itself.

The potato is native to South America but nowadays it is cultivated all over the world. In the 16th century, potato was introduced into Europe, and from there it was spread to the rest of the world and become a staple crop in many countries.

There are thousands of potato varieties worldwide, but only a few of these varieties are commercially available. Some of the popular varieties include Russet, red, white, yellow (Yukon), and purple potatoes.

Potatoes can be prepared in many different ways. They can be baked, boiled, fried or roasted, and often served as a side dish to meat or snack. Some common potato-based foods include French fries, potato chips, and mashed potatoes.

Potatoes contain almost no fat and are relatively low in calories. They are also rich carbohydrates, protein, and many vital nutrients like vitamin C, B vitamins, potassium, manganese, and more.

Potatoes with the skin on are a good source of fiber which keep your digestive system healthy. The skin also minimizes nutritional loss during the cooking process.

Moreover, potatoes contain a number of health promoting phytonutrients such as carotenoids, phenolics, kukoamines, and flavonoids. These compounds are well known for their antioxidant and anticancer properties, and their ability to reduce the risk of cardiovascular diseases.

The purple and red varieties contain the highest amounts of phenolic compounds with high antioxidant activity [1].

Here are the nutrition facts for a medium-sized baked potato with skin (173g) [2].

The flavonoids found in potatoes help reduce the risk of cardiovascular disease by lowering the levels of LDL cholesterol and keeping arteries free of fat.

The vitamin B6 present in potatoes is also useful to protect against heart disease. Vitamin B6 is capable of reducing the levels of a substance called homocysteine. High homocysteine levels are linked to an increased risk of heart attack and stroke.

Potatoes are an excellent source of potassium, which helps lower blood pressure by balancing out the negative effects of salt.

The high level of carbohydrates in potatoes may help in maintaining good levels of glucose in the blood, which is necessary for proper brain function.

A 1995 study published in the American Journal of Clinical Nutrition found that modest increases in glucose could help enhance learning and memory process [3]. Potassium, which encourages the widening of blood vessels, also helps ensure your brain gets enough blood supply.

As the potato contains mostly carbohydrates and easy to digest, it is a good diet for patients, babies, and those who difficult to digest hard foods but at the same time require energy. Potatoes also contain a significant amount of fiber that aids in proper digestion.

Some varieties of potatoes like red and russet potatoes contain high levels of phenolic compounds. These powerful antioxidants are known to help protect the body from harmful free radicals.

The antioxidant properties of potato help in reducing the age spots and wrinkles. Research has also shown that potato juice is able to moisturize the skin and make it glow. You can apply the juice of potato on your face to cleanse and rejuvenate your skin.

Peel a raw potato, grate it using a grater and squeeze to get potato juice. Apply this potato juice on your face and leave on for 15-20 minutes then rinse with clean water. Doing this regularly and you will feel that your complexion is getting lighter day by day.

Since potatoes are loaded with vitamin C, B vitamins and potassium, they can help relieve pain and inflammation, which are very beneficial for those who suffer from gout and arthritis pain. However, you should eat baked or boiled potatoes instead of deep-fried ones.

Alternatively, boil skin of raw potato in water for 3-5 minutes until the concoction is reduced to nearly half the amount. Strain the concoction and drink it at least three to four times a day.

Potatoes are good sources of calcium, iron, phosphorous, manganese, and zinc, which all contribute to the building and maintaining of bone structure and strength. But keep in mind that most of the minerals are in the potato skin, so leave potatoes unpeeled when preparing food.

Potatoes contain magnesium, which inhibits the accumulation or deposition of calcium in the kidney and other tissues, thereby helping to prevent kidney stones.

How to Choose Potatoes

When buying potatoes, choose those that are firm, smooth, and free from soft spots, which are an early sign of spoilage. Also, avoid those that have a green hue to their skin, sprouting eyes, cracks, or blemishes.

The green skin on potatoes is caused by too much exposure to light. When exposed to light, this green potato skin may contain solanine-type alkaloids, which can be quite toxic. Solanine produces a bitter taste and if eaten in large amounts can cause illness and, in certain cases, even lead to death.

If there’s a slight green layer on the potato skin, cut away the green portions before cooking and eating; there is no need to discard the tuber since the non-green portion is safe to eat.

How to Store Potatoes

Potatoes should be kept in a dark, dry place at the cool temperature (around 50°F). This will stop them from turning green and also reduce the risk of sprouting.

Don’t store raw or uncooked potatoes in a refrigerator because it turns the starch to sugar, resulting in a sweet taste and discoloration when cooked. If you do refrigerate, letting the potato warm gradually to room temperature before cooking it. This can reduce the discoloration.

You should also avoid storing potatoes in plastic bags or sealed containers as this can trap moisture, causing the potatoes spoil more quickly. A perforated plastic bag and paper bag are ideal since they allow better air circulation, thus extending their shelf life.